HOME NRI JOURNAL How Digital Capitalism Will Shape Our Future

How Digital Capitalism Will Shape Our Future

Since 2017, NRI has been conducting studies, “Digital Technology Creating Near Future” under a three-year project, and findings from the first year were published in a book called “Digital Shihon Shugi” (Digital Capitalism) by Toyo Keizai Inc. Takeshi Mori, one of the authors and a senior researcher at Nomura School of Advanced Management, talks about the background to digital capitalism and its attributes, as well as future scenarios.

Even With Weak Economic Data, Consumers Feel Better Off

GDP growth has been slowing down across the world, and Japan’s wage growth has been stalling since 1997. However, the “Surveys of 10,000 Japanese Consumers” carried out by NRI every three years since 1997 has found that people increasingly self-describe themselves as “upper-class” , “upper-middle-class” or “middle-class” compared with the average household.
This is likely because consumers are increasingly using free online services, loyalty points, mileage programs and the like and becoming smart shoppers with deals they have found. They enjoy the benefits of digital technology and thus feeling that the quality of their lives has improved even though economic data has been sluggish.

This means that consumer surplus—the difference between the highest price consumers are willing to pay and the amount they actually pay, or the perceived monetary gain—is on the rise. As consumer surplus grows, consumers feel they are better off. Consumer surplus is a subjective measure that is not included in GDP. But an analysis using an economic model found that no-cost digital services have created a consumer surplus worth 42 trillion yen in Japan (approximately USD 380 billion), which would account for about 8% of GDP. Based on this figure, perhaps we can say that approximately 10% of Japan's economy has already transitioned to digital capitalism.

With today’s digital disruption (destruction of a conventional industry structure by digital companies), marginal cost is declining sharply and consumer surplus continues to grow, while producer surplus (the difference between the price and cost, or corporate profit) is being squeezed significantly. Increases in consumer surplus are great, but we are producers as well. Lower corporate profit will slash employee income, capital outlays and tax revenue, and this would weaken purchasing power itself as well. Until now, digital technologies have contributed rather to decreasing sales prices and cost. Going forward, they will need to increase not only the highest prices consumers are willing to pay but actual prices as well, thus pushing up both profit (producer surplus) and consumer surplus, thereby creating a virtuous cycle for the economy as a whole; but this is quite a challenge and many companies are having a hard time doing so.

There are views that position the digital revolution that’s taking place around the world as Industry 4.0, or an extension of the industrial revolution that initially began in the 18th century. We can also consider the trend as a paradigm shift. According to this view, the economic system is shifting from industrial capitalism to digital capitalism, which is different in essence.

One symbolic example of digital capitalism is the emergence of a sharing economy, which taps unutilized assets. This means industrial capitalism—where the economic activity centered on production and consumption—gave rise to an economy system centering on use. Moreover, in industrial capitalism, labor remained the source of value creation, whereas what has happened with the advancement of digital technology is that data on activity by humans and things is collectively analyzed through networks and this has become the source of value creation. In her book The Human Condition, the 20th century philosopher Hannah Arendt said humans engage in “labor,” “work,” and “action,” and the early modern period (industrial capitalism) is a society representing a victory of “animal laborans.” Applying this theory to today’s society, robots and AI have decreased the scope of “labor” performed by humans, while at the same time the development of social media has expanded the scope of “activity,” it appears. In other words, if a shift is taking place from “a labor-driven society” to “an activity-driven society,” it’s safe to say that it is no longer part of industrial capitalism and that a new economic system is emerging. 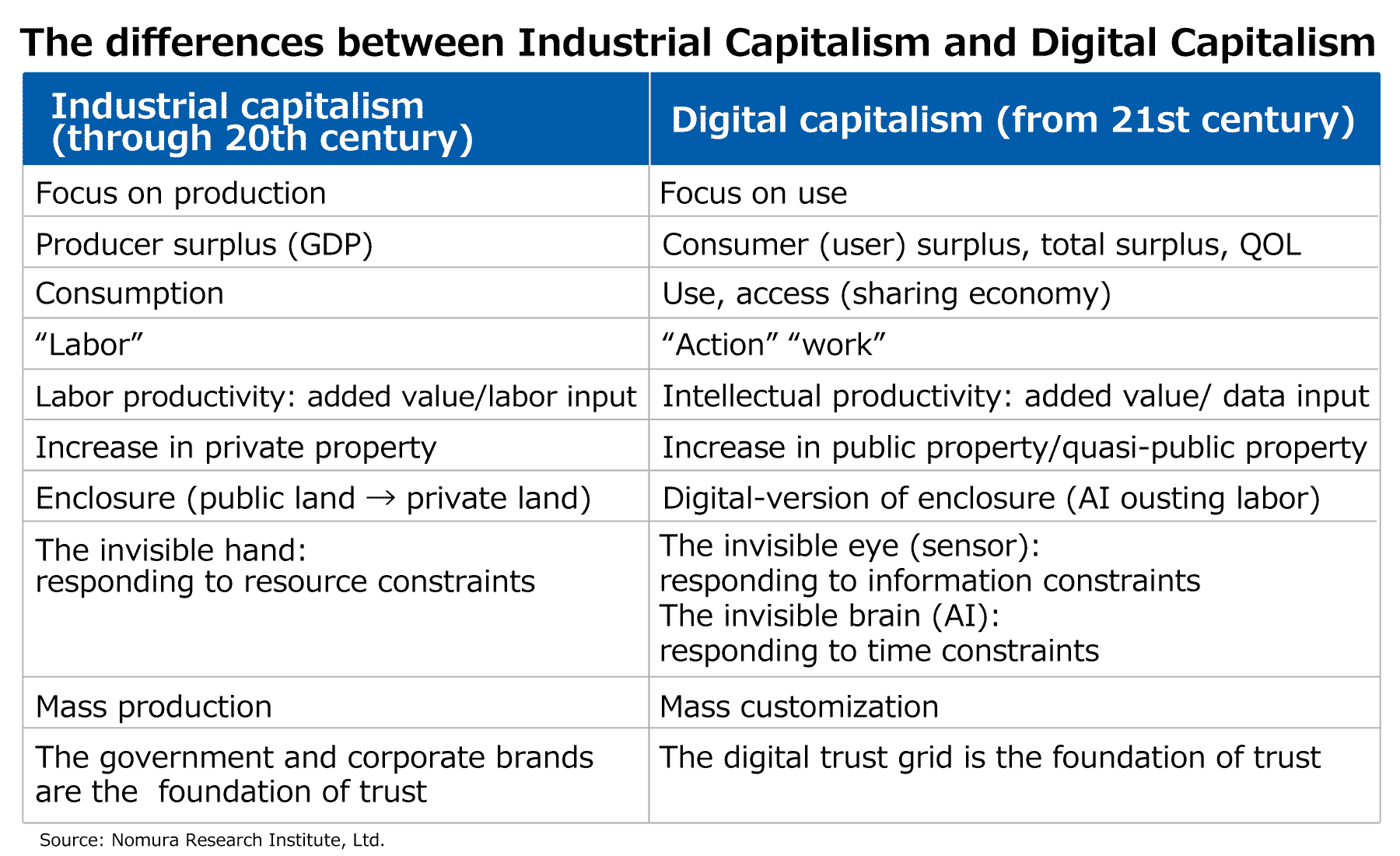 Digital capitalism is thought to take a different form depending on the country or culture. One survey has found that more people in Europe and the U.S. than in Japan feel that technological advancement has been changing their lifestyles too drastically. Different cultures have different levels of tolerance for digital technology. Similarly, different countries will likely devise different policies on the purpose of using digital technology, whether to strengthen platform providers, fortify the power of state, or provide equal opportunities to people by promoting a sharing economy.

Our book showed several future scenarios, one of which is “Pure Digital Capitalism.” Under this scenario, digital technology will be used chiefly to replace humans and to strengthen the profit-gaining mechanism and enhancing efficiency. Moreover, platform provider behemoths will control data, which is the source of value, and economic inequality will worsen, prompting discussions about introducing a basic income program. This paints a somewhat dark picture.

Meanwhile, in a scenario called “civic capitalism,” rather than platform providers being strengthened, users—or citizens—will strengthen their independence and autonomy. Platform providers will need to guarantee the transparency of data management and accept user independence or else lose users to competitors. Moreover, just as with the EU’s General Data Protection Regulation, countries will increasingly intervene and provide citizens with data independence. Digital technologies that will supplement and broaden human capabilities will be increasingly used as well. Meanwhile, people will actively share the skills and idle assets they own. Because they will become micro capitalists, economic inequality will not worsen as much as in the first scenario.

Technology is neutral, and how we use it is up to us, humans. Some paint a dark picture of robots and AI taking people’s jobs and leading to unemployment. But an important role Japan needs to play is present a society where digital technology is used to increase consumer surplus and thereby improve people’s quality of life.